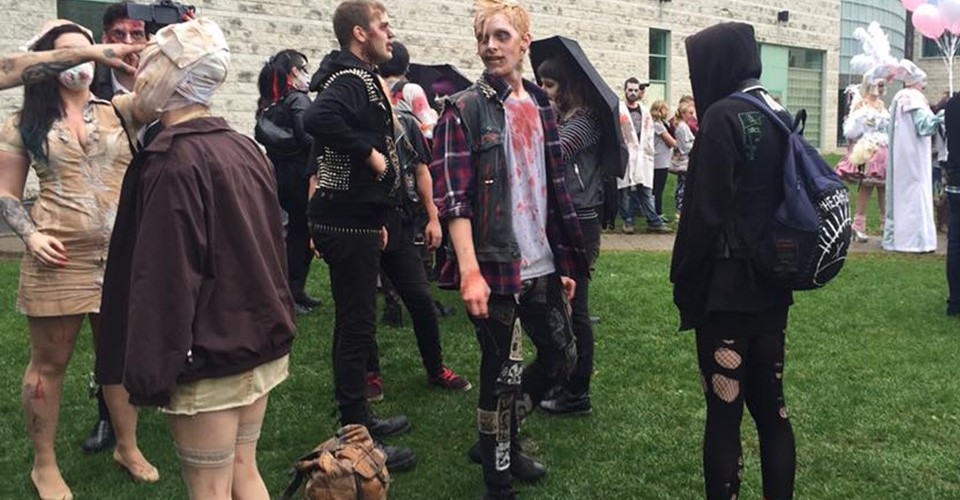 In honour of everyone’s favourite holiday, here are 13 spooky tracks to spice up your festivities:

The quintessential tune to kick off your Halloween festivities – sit back and let the King of Shock Rock usher you into your own personal rock-and-roll nightmare. I think you’re gonna like it.

The Cramp’s crazed rockabilly is just what you need to give your party an air of spooky (slightly unhinged) fun.

Considering the number of Ramones references in Stephen King’s hit novel, it’s no surprise the seminal punk band wrote their own adaptation.

The song is pretty much a direct adaptation of the novel, with the addition of “ancient goblins and warlords” and a dose of gothic despair (“I don’t wanna be buried in a Pet Sematary / I don’t want to live my life again”).

Shock rocker Rob Zombie has a lot of creepy tracks, but this one is the perfect mix of Zombie’s trademark bizarro lyricism, offbeat delivery, and heavy metal grooves.

Fun fact: The song appears on the soundtrack of Don Mancini’s equally bizarre Bride of Chucky.

With unsettling atmospherics, disturbing lyrics (“I’ve got something you have to see / they put something inside of me”), and catchy beats, this Hesitation Marks single plays like a deranged dance track.

Halloween wouldn’t be the same without this demented Transylvanian folk song.

Don’t let the flute fool you – this chilly folk-prog uses pastoral imagery and fantasy metaphors to cloak some of Ian Anderson’s most caustic barbs.

With an arsenal of classic songs like “Number of the Beast,” “Fear of the Dark,” and “Dance of Death,” Iron Maiden have long since mastered the epic horror narrative. This brief blast of classic heavy metal, tackling the real-life horror of nuclear annihilation in chilling detail, is one of their best.

“Don’t talk to strangers, ’cause they only mean to do you harm,” warns vocalist Ronnie James Dio on this foreboding track from his Holy Diver album. It’s a lament about disconnection and the paralyzing effects of fear in our everyday lives, and one of the eeriest songs in the heavy metal canon.

A thrashing club banger about an encounter with a ghost. Quintessential Kesha.

Made iconic by its use in the movie Wayne’s World, this eighties Cooper gem adds a Universal Horror twist to the hair metal genre. Unlike his literary incarnation, though, Cooper’s monster is lean, mean, and hungry, with no sign of an inferiority complex.

MCR’s cheeky send-up of the Twilight craze (and their own goth image) is one of their most joyous tunes.