Diemonds and Pigeon Park brought their cross-Canada tour to Ottawa’s House of TARG for a night of earth-rattling hard rock. 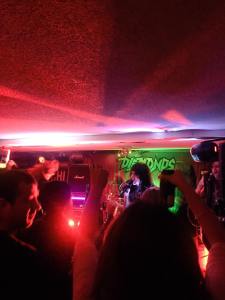 Opening the show, Vancouver five-piece Pigeon Park won over the crowd with perfect combination of laid-back stage banter, strong chemistry and swaggering rock songs. (A highlight was “One At A Time” – lead singer Nick Weber’s answer to the question, “How many other girls do you bring out here?”)

With notes of dance-rock, post-grunge, and alt metal, along with a few classic rock covers (Rush’s “Spirit of the Radio” and Zeppelin’s “Immigrant Song”) for good measure, the group is hard to pin down musically.

However, the band is a cohesive unit, and the genre-fluidity works. With solid original songs, tight musicianship, great stage presence, and a fresh, versatile sound, I wouldn’t be surprised if Pigeon Park are Canada’s next breakout rock group.

Fresh off a Juno nomination for their first major label album, 2015’s Never Wanna Die, Diemonds are one of the most exciting metal bands in the country.

The Toronto group plays like a cross between Judas Priest and Lita Ford, mixing old-school heavy riffs with hair metal hooks and lyrics that are simultaneously personal and epic in scale (“The Reaper is the enemy,” declares the title track).

Friday’s show was their first appearance at House of TARG. “We always come here to drink and play pinball, but this is our first time playing here,” vocalist Priya Panda informed the crowd.

The band – including guitarists C.C. Diemond and Daniel Dekay, drummer Aiden Tranquada, and bassist Tyrone Buccione – are killer, and Priya Panda is a confident and charismatic front-woman, engaging the crowd while shredding the songs. Diemonds is a group that should be dominating the rock charts, if there was justice in the world.

Their blistering set featured the majority of the Never Wanna Die album, as well as several singles from 2012’s The Bad Pack. The show ended on a political note, with a hard-rock cover of Neil Young’s “Keep On Rockin’ in the Free World.” The pointed finale left the crowd calling for an encore.

Overall, the show underscored the vitality of Canada’s rock scene. Be sure to check them out if they come to your hometown!