The 2017 Juno Awards in Ottawa were characterized by passionate performances and moving moments.

The awards broadcast, held at the Canadian Tire Centre on Sunday, was hosted by rock icon Bryan Adams and comedian Russell Peters. The co-hosts spent much of the night playfully ribbing each other. Peters notably questioned Adams’ choice to perform 2015 single “You Belong to Me” instead of an old hit – of course, Adams’ rocking performance proved him wrong.

The highest honours of the weekend were awarded to Canadian legends Leonard Cohen and the Tragically Hip’s Gord Downie. 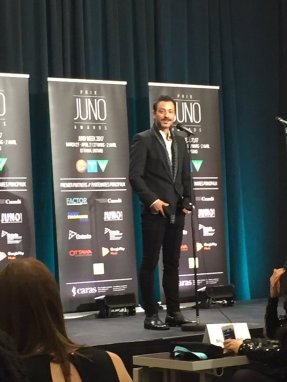 Adam Cohen speaks to the media about his father’s final album.

Downie’s touching pre-recorded acceptance speech placed the focus on Indigenous issues, while the Hip scored one of the night’s most memorable moments as they resisted the wrap-up music: “This is my arena, not yours!” declared guitarist Paul Langlois.

Later in the evening, alt-folk songstress Feist paid tribute to Cohen with a cover of his “Hey, That’s No Way to Say Goodbye,” which Cohen’s son Adam deemed “beautiful, touching, and understated.” Cohen, who was on-hand to accept awards on his father’s behalf, also revealed that he’d tried to recruit Feist to contribute vocals on You Want It Darker.

Those weren’t the only show-stopping moments at the 2017 Junos.

Tanya Tagaq describes her musical process as “a releasing of control.”

The broadcast was kicked off by a provocative number by A Tribe Called Red and experimental throat-singer Tanya Tagaq, followed by a fiery performance by Country Album of the Year nominee Dallas Smith. (The “fire” here is literal as well as figurative – the tattooed country-rocker utilized some wicked pyrotechnics).

Country-pop phenom Jess Moskaluke, who took home the Country award, would later highlight Smith and herself as examples of the musical “diversity” of the genre.

Next up was the always-solid pop sensation Shawn Mendes, belting out his hit “Mercy.”

The eighteen-year-old Mendes, who is gaining a reputation as one of the nicest guys on the Canadian music scene, would later win the Fan Choice Award – his first ever Juno. The award was fitting, considering he credits “the energy of the fans” for motivating his performances.

Alternative Album of the Year winners July Talk turned in an energetic performance of “Picturing Love,” which featured lead vocalists Peter Dreimanis and Leah Fay making the most of the large stage.

“You don’t even notice you’re playing,” reflected Dreimanis on their profile-raising performance. “You just black out. Not in a bad way.”

Another highlight of the broadcast was The Strumbellas, performing their delightfully catchy folk-pop hit “Spirits.” In what may have been the biggest coup of the Junos, the self-described “quirky” group beat out Drake and the Weeknd for Single of the Year.

The Strumbellas discuss their surprise win. Keyboardist David Ritter quips: “What we’ve heard is that, if you beat Drake, you become Drake.”

(Lead singer Simon Ward showed up shoeless to the post-Awards scrum on Saturday, having been so assured of a loss that he removed them during the Gala. “My wife said, ‘You should put on your shoes,’ [but I said] ‘We’re not gonna win, it’s all good,’” he recounted).

The two best performances of the night came from Rock Album of the Year nominees Billy Talent, who paid tribute to Gord Downie during their incendiary performance of “Afraid of Heights,” and Arkells, who brought out a gospel choir to back them up on “Drake’s Dad.”

Drake’s real-life dad, who appeared in the video for the track, was unfortunately unable to witness the spectacle: “We actually invited Dennis [Graham] to be here, but he has to shoot a commercial,” explained lead singer Max Kerman.

The nostalgic but forward-looking tone of the ceremony was summed up by the evening’s final performance, which saw the night’s performers join Bryan Adams for a “Summer of ‘69” sing-along.

The 2017 Junos mixed spectacle with reflection, and struck a perfect balance between honouring Canadian legends while showcasing the potential of younger artists.

Originally published in The Fulcrum as The Junos make a triumphant return to Ottawa; April 4/2017