“There is a worse version of The Room.”

How’s that for a hook?

But we’ll get to that later.

Earlier this week, a Calgary crowd became just the third Canadian audience to catch a screening of Best F(r)iends, a new film from Greg Sestero.

An actor and award-winning author, Sestero is perhaps best known as Mark, the duplicitous best friend of Tommy Wiseau’s character in Wiseau’s cult classic The Room.

As an aspiring performer, Sestero first met the enigmatic filmmaker at an acting class in Los Angeles. Wiseau was an acquired taste, but Sestero was struck by his offbeat confidence: “Despite everyone looking at him as a villain, I saw him as a quirky character.” They were roommates during the writing of The Room, and Sestero was eventually convinced to join the production – first in a behind-the-scenes role, then as co-star. What followed is the stuff of cinematic legend: an absurdly dysfunctional production process, unnecessary special effects, a confusing script, and a revolving door of cast and crew – culminating in a spectacularly awful movie that is now beloved by millions.

Over the past few years, Sestero has embarked on a campaign to redeem The Room’s legacy. “I realized that [Tommy and I] had this friendship and I really had to embrace it.” 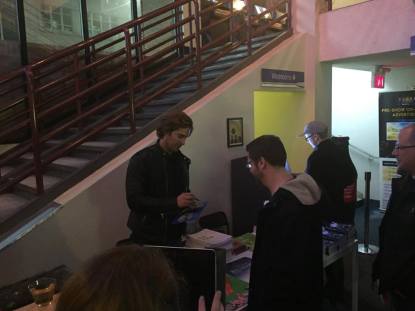 Sestero signs autographs at the Globe Cinema in Calgary

Step one was chronicling the production in “a great non-fiction book that could be made into a great film.” That book, titled The Disaster Artist, achieved critical acclaim (Wiseau, for his part, says he “approves of the book 40%”). Its upcoming film adaptation starring James Franco as Wiseau is likely to be one of the year’s biggest hits (Wiseau approves of the movie 99%).

Step two? Joining forces with Wiseau once again for Best F(r)iends, a film even stranger than The Room.

On November 29th, The Fifth Reel hosted Sestero at Calgary’s Globe Cinema for a screening and Q&A. (Good thinking!) Over the evening, Sestero shared stories about The Room, his mysterious partner-in-crime, and the making of Best F(r)iends.

Inspired by a post-Room road trip with Wiseau (“I thought we were just going to have fun, but Tommy thought I was taking him up the coast to try to kill him,” he recalls), Sestero wrote the script for Best F(r)iends in just four days. Currently making the rounds at festivals, the duo’s first on-screen pairing since 2003 has been hotly-anticipated by fans.

To be honest, I was slightly skeptical going in. Cult hits are hard to follow-up, and I couldn’t help but wonder – has Sestero made another bad movie to capitalize on The Room’s notoriety – one of those cynical exercises that tries to be bad and achieves merely mediocrity?

Thankfully, this film is more ambitious than that.

“There’s more to us than The Room,” Sestero asserts. And while it sometimes reads like a deranged love letter to its predecessor, Best F(r)iends is a truly unique movie destined for cult status in its own right. Filled with surreal mysteries, strange characters, and non-sequiturs, it’s the strangest movie I’ve seen since The Evil Within (another outsider masterpiece that premiered this past summer).

(It’s also partially set around Christmastime, making it a must-see for the holidays).

The film stars Sestero as John, a homeless drifter who befriends Harvey (Wiseau), a bizarre mortician and/or coroner who affixes his corpses with elaborate latex masks. Harvey has a dark past, and is constantly paranoid that “corporate” is going to shut him down. He also has a massive collection of dental gold (plucked from his clients’s cadavers), which Jon believes the two could sell for millions. (The plan never makes much sense – then again, not much does).

Harvey is initially reluctant (“If you end up in jail, I won’t be able to rescue you,” he warns. “But I can send you oranges!”), but there turns out to be a market for the used fillings among “internet nerds and dentists.” The partners soon find themselves rolling (literally) in cash – however, the money (inexplicably stored in an ATM machine in Harvey’s storage shed) soon comes between them.

It’s an overwhelmingly strange movie – ironically, the film’s sole anchor to plausibility is Wiseau himself. After all, Harvey’s odd habits don’t seem so improbable when you recall that the fact that Tommy Wiseau exists.

Asked in the post-screening Q&A why he chose to cast his friend as a mask-making mortician, Sestero replied, “That’s just what came to mind when I thought of a role that Tommy would fit.” He’d always felt that Wiseau’s decision to miscast himself as a romantic lead had been a missed opportunity, and wrote Best F(r)iends as a vehicle for Wiseau’s quirky charisma.

In this regard, Best F(r)iends is more self-aware than The Room. Much of the comedy comes from peripheral characters reacting to Harvey’s off-putting mannerisms. (There’s a great scene where a nonchalant Jon attempts to explain their macabre business to his girlfriend, who has just uncovered a lifelike mask Harvey made in his likeness).

The film works best as a character sketch of Wiseau. Sestero, who aimed to write a part Wiseau could “just step into” without acting, has an uncanny ear for the way his creative partner speaks.

At times, I found myself wondering if Wiseau had written his own lines, half-suspecting he’d been dropped onto the set and told to improvise. It surprised me to learn that the dialogue was almost entirely scripted by Sestero.

“At this point, I can think like Tommy,” he says.

(Wiseau did improvise the well-received line, “We should eat Chinese food in his honour…He was a wonderful Chinese man”).

Self-assured in its incoherence, Sestero’s parable of friendship and greed is a worthy follow-up to The Room. Fans will spot several homages to the cult classic (including a basketball sequence mirroring The Room’s aimless football-tossing scenes), as well as parallels to Sestero’s real-life friendship with Wiseau, as chronicled in The Disaster Artist.

These references were greeted enthusiastically by the audience, who shrieked with excitement when a forthcoming Best F(r)iends sequel was teased on-screen. “It was written as one film, and we thought, this is so insane, the audience is gonna need a break,” Sestero explains. He promises the conclusion, set for release next year, will be even more insane than the first chapter.

For me at least, the Part II can’t come soon enough, as Part I left us with too many unanswered questions: namely, is Harvey alive? Also, what’s with the lemons? Who was the clown on the autopsy table? Was he from corporate? What is “corporate,” anyway – is Harvey’s morgue a franchise? Who is Malno? Why does Harvey have an ATM machine in his garage?

In the meantime, I can only hope that Best F(r)iends will soon be screening in theatres across the country (hopefully at midnight).

What about that “worse version of the Room” we were promised?

Sestero, The Kinkonauts, and a guest from the audience perform an early draft of The Room.

Prior to the screening, Sestero joined members of local improv troop The Kinkonauts for a live reading of one of Wiseau’s early Room scripts – and yes, it was even worse than the movie.

The prototype featured the same slight plot, disjointed dialogue, and inconsistent characterizations as the final film, with the added pleasure of Wiseau’s garbled stage directions. Johnny doesn’t just wake in the morning – he “sleepily arouses.” Lisa and Mark dance seductively, “touching each other’s shoulders, hips, and knees.” Characters cackle at serious moments and inexplicably throw ice, cherry tomatoes, and prawns at each other.

(My personal favourite: “Johnny puts on a heavy metal music and the mood changes to fast dancing”).

That said, there are some of Wiseau’s early ideas that Sestero wishes had made the final cut. Notably, the cast and crew talked Wiseau out of adding a flying car to the film’s climax. “We all regret that decision,” he says.

To Wiseau’s fans, mockery of The Room has given way to something approaching genuine adoration. Wiseau is less-than-forthcoming about his personal history, and Sestero is often looked to for insights. (One fun fact we learned from Sestero: Wiseau’s favourite band is U2).

Sestero is well-aware how profoundly bad The Room is. However, he has a genuine affection and respect for Wiseau as a creative force. “I think both of us are outsider artists,” he told the crowd. “The yin and yang of Tommy and I working together produced some crazy stuff.”

Had Sestero not ended up in The Room, he suspects he would have had a “mundane, normal” acting career, or quit the industry altogether. “I think what’s really scary is having an average life as a creator,” he says. “I probably would have given up.”

Sestero zeroed in on what makes The Room and its creator an unlikely inspiration to struggling artists, aspiring filmmakers, and weirdos everywhere: “The Room started out as a big joke…[but] I think, in the end, it won. Fifteen years later, it’s still screening.”

“Having that certifiable uniqueness ended up winning out.”