Bluesfest went out with a power chord, with punk headliners Rise Against following a diverse line-up of Canadian rock bands on the festival’s final night. 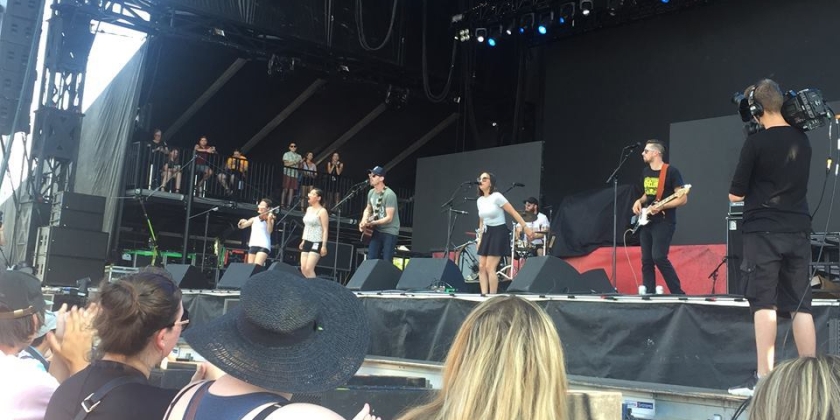 Roots rockers The Jerry Cans took the stage at 5 PM, playing a set of danceable jigs with Inuktitut and English lyrics. 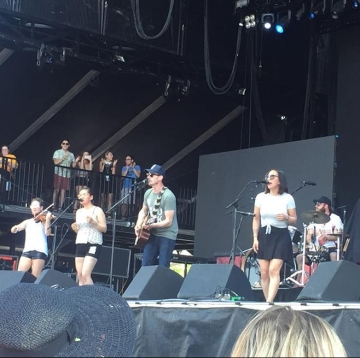 There was also a section of unaccompanied traditional throat singing pieces by Mike and Keenainak, and an Inuktitut language cover of The Tragically Hip’s “Ahead by a Century.” (The Hip themselves had a chance to hear the song just prior to Gord Downie’s death, Morrison noted).

With a unique, rootsy sound and sincere songs, The Jerry Cans put on one of the most fun shows around. 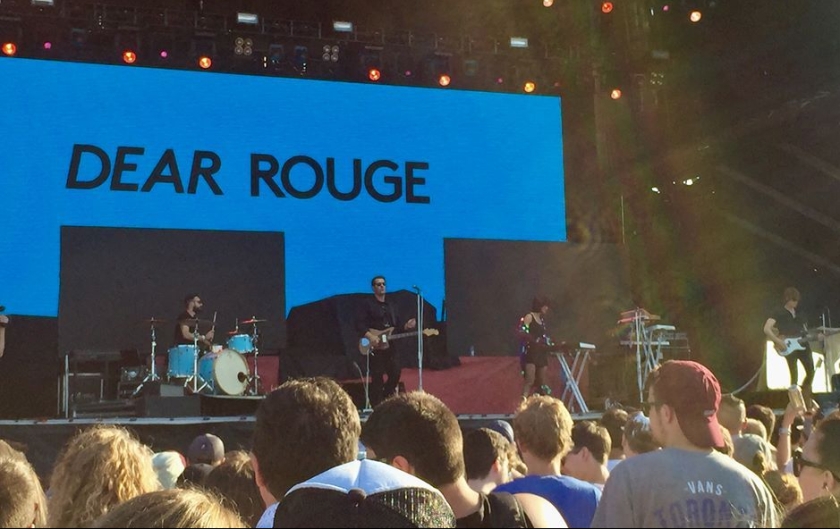 The next band to take the stage was a sharp contrast to the other bands on the City Stage that night.

Playing new wave-ish electro-rock, Dear Rouge sounded a bit like Metric mixed with Rough Trade. The Vancouver-based band, formed by husband and wife Drew and Danielle McTaggart, is touring in support of their latest record Phases.

Taking the stage in a black dress and a glittering, peacock-coloured cape, lead singer Danielle McTaggart showed off her strong voice and dynamic presence on opening track “Modern Shakedown.”

Three songs in, the stage suffered what appeared to be a complete and total power outage. The issue was fixed after only a few minutes, and the band triumphantly re-took the stage to the opening riff of The White Stripe’s “Seven Nation Army.”

“I think you guys may be one of the best crowds we’ve ever had,” Danielle raved. “Seriously, thank you for sticking around.”

They spent the rest of the set making up for lost time, powering through the rest of their set with renewed energy. It was a super cool show, and was almost enough to make the crowd forget the heat.

The heat had died down somewhat by the time alt-metal foursome Three Days Grace took the stage – perfect weather for fans of all ages to re-live our angsty youths.

Opening track “The Mountain” (the first single off their recent Outsider album) showed that the Norwood, Ontario band hasn’t lost their underdog edge. 2009’s “The Good Life” was a catchy rocker that had the crowd pogo-ing, and old school fans enthusiastically sang along to early hits like “Pain,” acoustic-tinged anti-suicide power ballad “Never Too Late,” and the bitter “Home.”

“They say home is where the heart is,” lead singer Matt Walst said of the song. “Sometimes it’s the people in your house who will break your heart.”

Walst, who joined the band in 2013, showed off some great metal growls and screams, frequently entreating the audience to “keep that mosh pit goin.’” On penultimate track “I Hate Everything About You,” he was aided by hundreds of fans belting out the song’s conflicted chorus.

After a night of songs about seething resentment, it was only appropriate that the anger would eventually boil over. By that metric, the punky “Riot” was a perfect closer.

I took in the first half an hour of a quirky show by Ottawa’s The Peptides at the Claridge Stage, before making my way back to the City Stage for the headliner.

Rise Against closed the festival with a set of lively, anthemic punk rallying cries.

“Let’s go out with a bang,” singer/guitarist Tim McIlrath declared, adding slyly, “In the interests of full disclosure, we don’t play the blues.”

The Chicago punks showed their hardcore influence on “Megaphone,” a 2017 bonus track and political call to action. McIlrath explained that the song was written about “putting your hand on the steering wheel and turning it where you wanna go.”

“Hope is not enough,” he stated. “Action and friction is where change happens.”

They hit another high note with an impassioned performance of their 2008 hit “Saviour.”

The final night of Bluesfest was perhaps its most perfectly curated evening, showcasing some of the scene’s most vital established and upcoming rock acts.