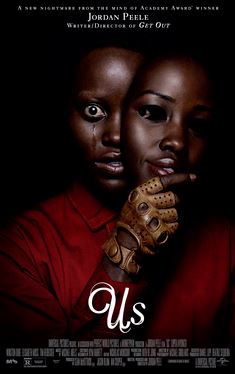 Jordan Peele’s follow-up to Get Out is a far weirder horror opus.

Us begins with a flashback: a little girl in a Thriller t-shirt (that shirt should be a spoiler, but there’s so much else going on that it falls down the memory hole) getting lost in a Hall of Mirrors and bumping into a girl who looks just like her. It’s not a reflection.

Thirty-some years later, the former lost girl feels history repeating itself. Now a mother of two, Adelaide Wilson is a bundle of nerves vacationing just a stone’s throw away from that fateful funhouse, watching her kids like a hawk and convinced that her reflection is following her. (Her distress is rendered elegantly – a former ballerina who used dance to recover from trauma, she finds her body reverting to those rigid postures as she stares helplessly out the window, waiting for the inevitable).

Adelaide’s fears, irrational as they seem, are validated when her family is visited by a quartet of knife-wielding, jumpsuit-clad doppelgangers. They are the Untethered, a clan of tunnel-dwelling shadow people who want their turn in the sun.

So far, this sounds like a conventional fantasy horror flick. But rest assured, Us is much stranger than that.

Director Jordan Peele wields conventional horror tropes expertly, supplying some inventive kills and exhilarating thrills as the Wilsons flee and the Untethered stalk and slash their way to the top. If this were all there was to it, Us would still be a top-tier slasher, perhaps this generation’s Nightmare on Elm Street. But that isn’t all: the bloody violence builds up to a mind-bending climax that’s wonderfully surreal, brutal and beautiful in equal measure.

Horror and humour are two sides of the same coin, and Peele (who made his bones in sketch comedy) does both equally well. Us is not a horror-comedy per se, but a disorienting, tonally-unstable viewing experience that keeps the audience in suspense.

The initial appearance of the Untethered is a pitch perfect mix of creepiness and black comedy, which gives way to a terrifying home invasion scene. A later sequence, by contrast, is gory slapstick, culminating in an Alexa-knockoff mishearing a victim’s plea to “call the police” as a request for the NWA song “F*ck the Police.”

The Untethered, too, are kind of funny, walking around as deranged parodies of their surface doubles, squawking like low-budget pterodactyls. (Adelaide’s doppelganger, Red, is the only one who can speak, which she does in a breathless wheeze, as if her voice-box has been ripped right out.) The sheer weirdness of the creatures makes them even more disturbing to watch, even as they insist they’re no less human than anyone else. “We’re Americans,” says Red, as the Wilsons demand to know who they are. (It doesn’t make sense until later. Even then, it doesn’t really make sense).

Peele has a knack for small details with satirical bite. For instance, the vision quest-themed funhouse where Adelaide gets lost in 1986 is brazen example of cultural appropriation; thirty years later, it’s been re-named in deference to political correctness, but none of the insensitive artwork has been altered. It’s a very funny little sight gag that adds an edge of realism to Peele’s twisty myths.

The director’s 2017 debut, the explicitly political Get Out, was catnip for think-piece writers; with Us, Peele goes out of his way to avoid being such easy debate fodder. Vague allegories and references to government conspiracies are cloaked in layers of opaque fantastical imagery: vast networks of tunnels teeming with rabbits, hauntingly violent dance sequences, an army of killers joining hands in a baffling act of defiance. The revealed origin of the Untethered is too confusing for analysis, and an ethically-wrenching twist ending calls into question Adelaide’s status as the film’s hero – even as it admires her commitment to preserving her piece of the American dream.

Get Out (grim alternate ending notwithstanding) ended with its sympathetic protagonist methodically taking out his captors before being miraculously rescued by cinema’s most heroic TSA agent. There’s no such catharsis in Us. Long before the final scenes, society as a whole has been upended, and the audience finds itself questioning who, exactly, they should be rooting for.