Marilyn Manson and Rob Zombie brought their Twins of Evil tour to Ottawa this Friday.

The theatrical shock icons make for an admittedly mismatched two-headed monster (Manson, known for his demonic persona and cutting social commentary, is a totally different beast than schlock horror-worshipping rock-n-roller Rob Zombie) but for metal fans, they were a match made in heaven.

Taking the stage in front of a perverted parody of the American flag, Marilyn Manson opened with an appropriately abrasive version of “Angel With the Scabbed Wings,” before wading into the crowd for a satirical sex and violence anthem “This is the New Shit.” Holy Wood single “Rock Is Dead” was another highlight, mixing heavy metal riffs with sharp lyrics about drugs, religion, and conspiracy theories.

Manson’s voice was in fine form, alternating between demonic shrieks, otherworldly warbling, and ominous crooning on dark ballads like “The Nobodies.”

“This is one of my most special songs I wanna share with you,” he confided, releasing a bouquet of black balloons into the rafters.

Manson cultivated an intimidating stage presence, accentuating his disturbing songs with jerky twitches and convulsions. Between songs, he showed off a vulgar sense of humour, quizzing fans about their drug habits and offering (threatening?) to expose himself to the crowd. His taste for the theatrical at times bordered on camp; when he returned for Mechanical Animals single “The Dope Show,” he was decked out in a black feather coat that made him resemble a gigantic raven.

Heaven Upside Down single “Kill4Me” was unexpectantly funky, with Manson singing “You won’t be kissin’ me unless you kill for me.” Extending his index finger like a handgun towards the crowd, he pretended to pick off audience members one at a time; soon the whole crowd was chanting “Kill! Kill! Kill!” (Hmmm, maybe he is a bad influence…).

After a few bars of his distorted version of David Bowie’s “Cat People,” Manson sang a medley of sinister singles “If I was Your Vampire” and “Say10.” He cut the lights for a massive sing-along of his iconic Eurythmics cover “Sweet Dreams (Are Made of This).”

Towards the end of the set, Manson emerged atop a fascist pulpit, clothed in papal garments; towering over the audience, he performed an authoritative version of “Antichrist Superstar” (“Repent! That’s what I’m talking about!”) before lowering himself into the pit again for a finale of “The Beautiful People.”

“You want me to end this in a big way?” he teased. “Fireworks? Uniforms?…Well, I’m not doing that. But I will give you this.” With that, he howled out a killer final chorus surrounded by throngs of screaming fans – in effect, bringing arena rock back to the masses.

Rob Zombie’s headlining set was drastically different in tone. In contrast to Manson’s stark palette, Zombie’s show was a sensory assault, with flashing lights, surreal music video clips, and multiple appearances by giant monsters on stilts. “I don’t really care about a rock show,” he announced early on. “I just came here to party.”

Fringed jacket and jeans complementing his trademark long hair and beard, Zombie looked like a Southern rock wild man as he opened with 2013 single “Dead City Radio and the New Gods of Supertown.”

Flanking him on each side were the eerie visages of guitarist John 5, drummer Ginger Fish (both accomplished Manson veterans) and masked bassist Piggy D (known for his work with Wednesday 13 and Alice Cooper), who supplied the hard-hitting riffs and propulsive beats that made shock metal anthems like “Superbeast” and “Get Your Boots On!” equally suitable for dancing or headbanging.

“Living Dead Girl” felt like a goth beach party, which juxtaposed the song’s German Expressionist-inspired video with the release of dozens of giant bouncing balloons. 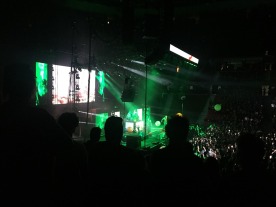 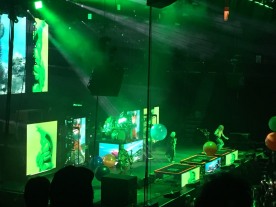 Zombie’s love of B-movies was apparent in the cheerfully vulgar “Well, Everybody’s Fucking in a UFO,” which saw a gigantic ape-like Martian dancing across the stage, as well as lecherous murder ballad “P*ssy Liquor,” which sampled from his 2003 film House of 1000 Corpses. 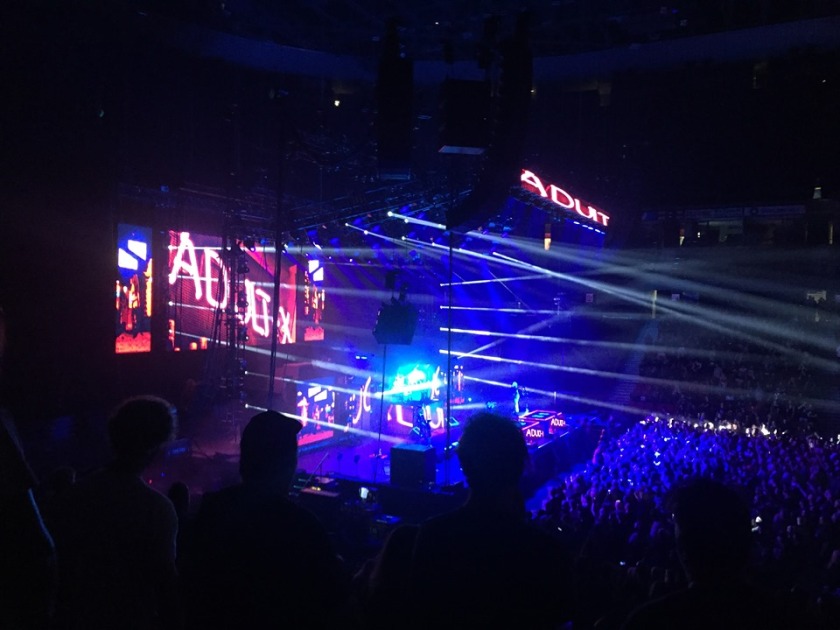 There was also a generous helping of White Zombie tunes, including “More Human Than Human,” “Electric Head: Part 2: The Ecstasy,” and “Thunder Kiss ’65.” (The latter two tunes featured cameos by a giant robot and grinning demon, respectively). 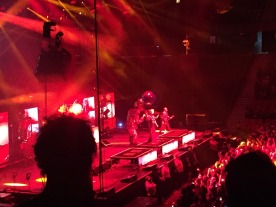 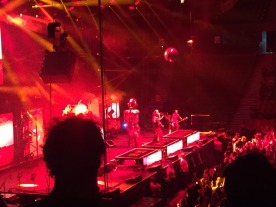 Zombie’s old-school rock star stage presence and carnival barker delivery were well-suited to his aggressive, electro-tinged brand of heavy metal. His infectious energy never let up for a second; as the crowd was treated to an impressive guitar solo by John 5, he took the opportunity to take a lap around the arena, high-fiving fans before returning to the clarion call of a Led Zeppelin riff.

He closed the set with a pair of cover tunes (Ramones classic “Blitzkrieg Bop” and The Beatles’ “Helter Skelter,” accompanied by images of the Manson family murderers) before screening a trailer for his upcoming film 3 From Hell. (Zombie moonlights as a director of vicious slasher movies; his long-awaited sequel to House The Devil’s Rejects is expected to be released this fall).

After this short break, Zombie re-emerged atop a raised platform (which resembled an H.R. Giger alien) for an encore of his signature song, horror hot rod tribute “Dragula.”