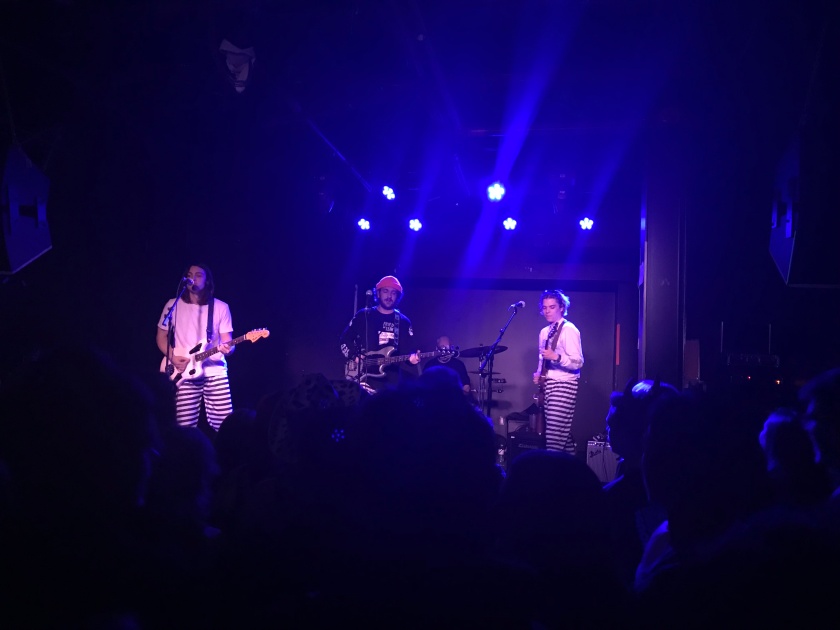 The Toronto quartet delivered a characteristically fun hour of nonchalant, glam-flecked surf-punk, opening with “Mother to a Brother” and recent single “U Got It.”
Their set list ranged from raucous rockers to grimy ballads that crescendoed to glorious, howling denouements (each equally mosh pit friendly, oddly enough). There was also a random half-assed cover of “Summer Nights” from Grease, which led one member  to share his mixed feelings about John Travolta.
The musical action was frequently interrupted by jocular banter about Value Village Halloween costumes, the importance of staying hydrated, and whether Canada is truly home to the serial killer capital of the world.
They closed with fan fave “Typical,” which had the crowd howling along to its timeless chorus of “Call me old-fashioned / but I’m looking for some love / with some action.”
Opening act No Hits got in on the costumed fun, taking the stage attired as the Three Little Pigs and the Big Bad Wolf (having seemingly survived devouring Little Red’s grandmother, judging by the pink nightgown).
The local indie rockers hit a high note early on with “Sirens,” a Southern-tinged twisted love song / murder ballad. Protest song “Peach Tea” evoked The Tragically Hip or a grungier version of Arkells, and closing tunes “You And I Are Gonna Be Alright” and “Swim” channeled vintage indie and alt-rock.

Midway through the set, they reminisced about covering Goodbye Honolulu’s catchy drug ditty “Codeine,” and obliged when someone in the crowd called for them to play it. (The apparently had the band’s blessing; otherwise, this seems like it would have been a pretty severe breach of opening act etiquette).
“I think we do it a little better than those Goodbye Honolulu guys,” boasted the lead singer.

The second act of the night, Montreal four-piece Winona Forever, came dressed as the gang from Scooby Doo (all they were missing was a Great Dane), which paired nicely with their quirky blend of psychedelic indie pop.