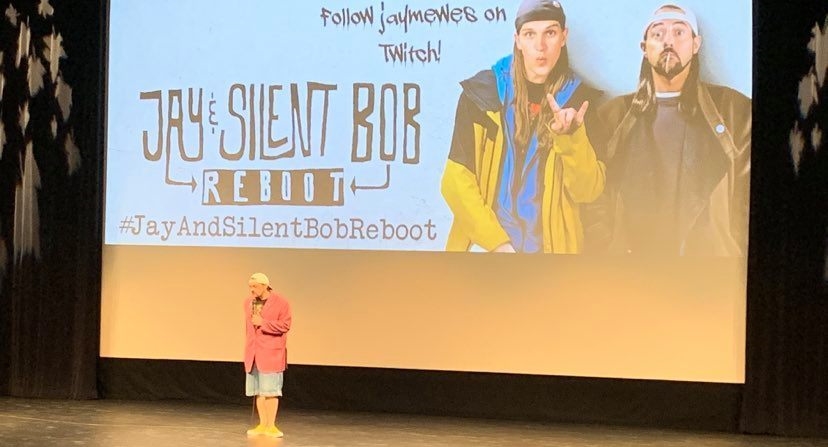 Kevin Smith brought his Jay and Silent Bob Reboot to Ottawa on Monday.

The writer-director (also known as Silent Bob) screened his latest cinematic opus before a sold-out crowd at the Algonquin Commons Theatre, before treating fans to a lengthy Q&A.

Introducing the film, Smith remarked on the vocal reaction it’s been getting from audiences on the tour. When the film debuted in New Jersey, he was surprised to see the level of crowd interaction, with audience members bursting into cheers whenever a familiar face appeared onscreen or a reference was caught. That sort of reaction has continued throughout the tour. (As he’d predicted, a reference to Ottawa’s own Alanis Morisette got a big reaction at the Algonquin screening).

“It’s like the Rocky Horror Picture Show,” he said.

Smith’s cult following certainly rivals that midnight favourite, and his cinematic universe is even more ambitious.

In the early nineties, he famously filmed his cult classic debut Clerks in the convenience store where he worked, using gritty black-and-white photography and a running gag about broken shutters to obscure the fact that he was restricted to night shoots. The sleeper hit spawned a series of sequels set in the same world, but varying wildly in tone, ranging from emotional indie dramedy Chasing Amy to high concept comedies like fantastical religious satire Dogma.

The common thread connecting Smith’s seven “View Askiewniverse” films is the duo of Jay and Silent Bob, played by Jason Mewes and Smith himself, respectively). A pair of unambitious weed dealers first seen leaning against the wall of the Quick Stop, the characters evolved from bit players into leading men over the course of the series, saving the world from a pair of fallen angels in Dogma and taking on Hollywood, diamond thieves, and a Lord-of-the-Rings loving fry cook in later films.

The Jay and Silent Bob Reboot winkingly rehashes the plot of 2001’s Jay and Silent Bob Strike Back, sending the two stoners on a quest to sabotage a planned reboot of the Bluntman and Chronic movie – which was itself an adaptation of the Holden and Banky comic introduced in Chasing Amy, which cast the duo as stoned superheroes. (The View Askiewniverse is trickier to follow than the MCU).

Smith said that the latter plotline was inspired by seeing Jason Mewes (who Smith supported through years of heroin addiction) come into his own as a father. Smith raved about his friend’s parenting skills, clearly in awe of his transformation from “the man you wouldn’t trust with a carton of eggs, let alone the safety of another human being” to a “super-Dad.”

“He is the best father I have ever seen,” Smith gushed. “And I include myself in that.”

He also opined that Reboot features his friend’s most powerful performance yet. The movie boasts several poignant scenes where Mewes’s generally nonchalant character struggles to connect with the daughter he never knew existed and inadvertently abandoned.

“I knew your dad a bit,” Jay admits at one point, fighting tears. “He was a piece of shit.”

While Smith (and Mewes) put a lot of heart into the movie, it wasn’t actually the director’s first choice.

In the post-screening Q&A, Smith revealed that The Jay and Silent Bob Reboot only came to fruition after planned sequels to Clerks and Mallrats fell through. (Clerks III was ready to go until one of the co-leads suddenly backed out, and Mallrats II wasn’t greenlit by Universal, who’d forgotten they even owned the first Mallrats). After those disappointments, Smith decided to work “smarter, not harder” by scrapping those scripts for parts and re-working them into another Jay and Silent Bob movie.

Thanks to some savvy legal maneuvering during his initial negotiations for Clerks, Smith and Mewes own the Jay and Silent Bob characters outright – a coup Smith compared to Star Wars actor Anthony Daniels owning the rights to C3PO.

(As Smith tells it, he wrote the script for the Jay and Bob-centric Dogma prior to making Clerks, and asked if he could get permission “borrow” the characters. The legal team at Miramax, Smith recalled, were perplexed as to why he wanted the rights to two guys who just leaned against a wall; his lawyer got creative with his answer, claiming that Mewes was paranoid about his identity being permanently owned by Disney.)

Although intellectual property wasn’t an issue, other Reboot arrangements were an uphill battle. Smith hoped to replicate the structure of Jay and Silent Bob Strike Back, but feared he no longer had the clout to match that film’s star-studded cast. In the end, the finished film ended up with twice the star-power, with cameos by everyone from Val Kilmer to Chris Hemsworth – not to mention stoner icon Tommy Chong, wrestler Chris Jericho, SNL’s Fred Armison and Molly Shannon, Impractical Jokers prankster Brian Quinn, and rappers Method Man and Red Man.

Other actors joined without warning at various stages of production. For instance, Smith was unable to connect with an “off-the-grid” Matt Damon until filming was pretty much completed; when the Oscar-winner finally got in touch, Kevin replaced a planned animated sequence with a brief monologue from his Dogma character.

“Do you think we can still get the costume?” Damon asked excitedly.

“It was jeans and a hoodie, so yeah,” was Smith’s reply.

Other appearances from View Askiewniverse denizens just didn’t pan out. For instance, Canadian singer Alanis Morrisette was unable to reprise her role as God (Smith thought her non-response was “fucking weird” until finding out she’d just had a baby), and Star Wars icon Mark Hammill was too busy with…other things…to reprise his acclaimed role as rubber-fisted supervillain Cocknocker (“The Empire won’t let me,” was his excuse).

Meanwhile, Dogma alum Chris Rock and various other Smith associates (including Scott Mosier, Quentin Tarantino and James Gunn) were set to appear in an extended montage in which Jay and Silent Bob travel from set to set “kicking the shit” out of various directors; however, the sequence was cut to accommodate a lengthy Ben Affleck appearance.

Affleck’s casting marked the end of a decade-long estrangement between him and Smith, who had a tearful on-set reunion.

Smith credits journalist Kevin McCarthy for inadvertently sparking the reconciliation; Affleck’s polite response to a question about the Reboot had the rest of the cast begging the director to reach out (particularly Mewes, who thought Affleck’s comment was “a coded message”).

After reconnecting via text, Smith offered his old friend the coveted role of Cocknocker (which the two-time Oscar winner, to his credit, accepted). But Smith soon realized he was missing an opportunity, and quickly re-wrote the script to accommodate a heartfelt scene featuring Holden, Affleck’s character from Chasing Amy. (The scene also features the return of Chasing Amy star Joey Lauren Adams – an experience she found more rewarding than her brief cameo “walking out of a movie theatre” in Strike Back.)

That pivotal moment has Holden (now co-parenting a child with his ex and her wife) tell Jay about the wonders of fatherhood, prompting the vulgar stoner to abandon his vendetta in order to connect with his own child. (Holden’s daughter, Amy, is of course portrayed by Jason Mewes’ five-year-old daughter Logan.)

Smith noted that this was the first time Affleck had seen Mewes sober in many years, and that he was shocked to find his old friend (who was “circling the drain” the last time they’d seen each other) a doting husband and father with a decade of of sobriety under his belt.

“Can you believe Mewes has been sober for ten fucking years?” Affleck asked Smith.

Smith also recently buried the hatchet with Clerks star Jeff Anderson, who agreed to come back on-board for Clerks III.

The project will require a whole new script; Smith said his original draft is now unusable, both because so much of it was repurposed for Reboot, and because it was (in his words) “depressing.”

His early script, Smith explained, had a strong fixation on death and mortality, which started to hit too close to home after his own 2018 heart attack. He assured us that the new version will be lighter – it supposedly begins with Randall having “a massive heart attack.”

The health scare will apparently force the Quick Stop court jester to re-examine his life, inspiring him to make a movie based on his experiences. (Basically, the new Clerks will recreate the filming of the original Clerks. Awesome, eh?)

Towards the end of the Q&A, Smith was asked by an audience member (who had also suffered some frightening health issues) about the psychological impact of his heart attack.

Smith replied that the event reminded him that he is “living on borrowed time,” and that it inspired him to pursue more of his passion projects. He admitted that while he felt a sense of peace when confronted with the prospect of death, his contentment was dimmed somewhat by the realization that if he had died that day, his last film would have been Yoga Hosers.

“I love Yoga Hosers,” he explained, “But it’s a film made by someone who doesn’t know he’s going to die in a few months.”

He credits his newfound “mission” for staving off any hint of post-heart attack depression. That said, he added, his fatalistic conviction that all subsequent projects must “represent everything I stand for” didn’t really work out during the production of He-Man.

(Smith recently finished writing the scripts for a Netflix adaptation of Masters of the Universe. Also on the horizon are an audio play and Canadian horror comedy Moose Jaws. His other dream project has also recently been greenlit: “Before I came here tonight,” he revealed, “I was working on the script for Mallrats II.”)

Another positive outcome of his heart attack, Smith said, was that it made it easier to “guilt” his casts. He claimed that his brush with death was what persuaded several old friends to sign on for Reboot – that, and the fact that they were filming in New Orleans during Mardi Gras.

However he managed it, it’s a delight that he did. For Smith fans, Jay and Silent Bob Reboot feels like a giddy family reunion, complete with in-jokes, dirty jokes, spilled secrets, and a few tears.

And it seems like it felt that way off-screen, too.