Ranging from acoustic folk ballads to rollicking blues numbers, the set combined Cockburn’s iconic hits with deep cuts from his over fifty-year career. The show was also heavy on songs from his latest album Bone on Bone, which more than held their own alongside his older material.

Cockburn’s witty stage banter contrasted with the heavy subject matter of the music. The 72-year-old frequently made jokes about his age; at one point, he responded to an audience member’s shouted song request with, “My memory’s too weak to remember that!” His band was also top-notch, making use of unexpected instruments and arrangements that helped the classic tunes feel fresh. An impeccably-timed light show, drenching the minimalist sets with mellow greens and stark reds, added additional layers of emotional intensity.

The band opened with 1980’s “Tokyo” and followed up with a rocking, accordion-aided performance of “Lovers in a Dangerous Time.” Cockburn then went acoustic for two tracks from Bone on Bone – the bluesy, political “States I’m In” and the spiritual “Forty Years in the Wilderness.”

He then unearthed a more obscure tune – the anti-racism “Free to Be,” which Cockburn wrote after watching a disturbing TVO interview with members of the racist Western Guard Party. “The media kind of liked them,” he said of the now-defunct fringe group, active in the 1970s. “It was Canada; that’s what passed for exciting.” Although written nearly fifty years ago, the song (which Cockburn describes as “geologically speaking, not so old”) still feels timely – although the singer did take a moment to apologize for dated references to “switchboards.”

A well-known social justice advocate, Cockburn largely avoided talking politics between songs. There was no need – his piercing lyrics to speak for themselves.

Cockburn’s impassioned playing and singing brought a sense of despair and urgency to “If I Had a Rocket Launcher” (written after visiting a Guatemalan refugee camp) and the environmentalist lament “If A Tree Falls.” His spiritual songs provided a glint of hope, particularly the joyous gospel tune “Jesus Train” and the serenity-in-the-face-of-nuclear-annihilation anthem “Wonderin’ Where the Lions Are.” 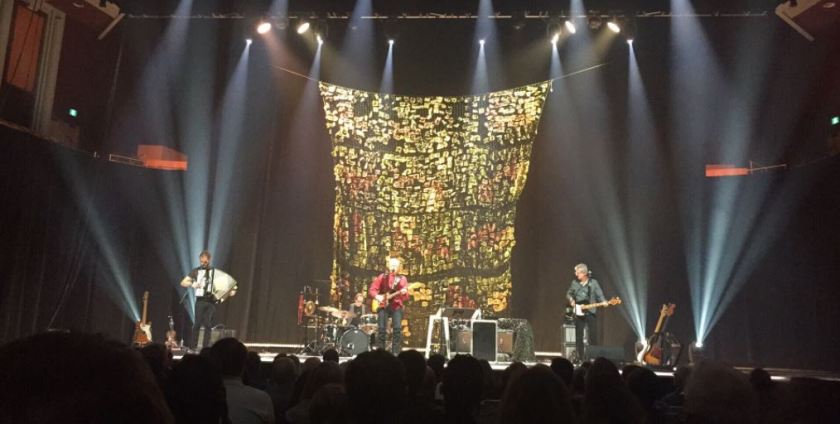 This diversity of material also allowed Cockburn to play with contrast, alternating between light and dark, hope and despair. One particularly jarring juxtaposition was his choice to follow “Three Al Purdys,” (an upbeat tribute to the late Canadian poet) with a searing, distortion-heavy rendition of “Stolen Land.”

The latter track, a potent protest song drenched in distortion, may have been an unconventional finale. However, it was fitting note to go out on for an artist whose music rejects platitudes and easy conclusions.