“I did my apprenticeship in the pubs of Atlantic Canada,” joked the former Great Big Sea frontman as he took the stage at SAIT’s 2500+ seat Jubilee Auditorium. “We’ve played a lot of places that were a lot less clean than this.”

Accompanied by a fantastic band, Doyle played a mix of Great Big Sea hits, solo material, and traditional sea shanties (“something I love doing in this part of the world,” he noted). If the cheers from the crowd were any indication, there were more than a few Atlantic Canadians in the audience. Although the darkened auditorium was nearly full, the show had the feel of an Irish house party.

Highlights included “The Old Black Rum,” “Ordinary Day,” and “When I’m Up (I Can’t Get Down),” as well as more recent singles such as the buoyant “I’ve Seen a Little But it Ain’t Enough,” which kicked off the first of two encores.

Another standout song (and my personal favourite) was the was the blues-drenched outlaw tale “Testify,” featuring a scorching solo by guitarist Cory Tetford.

There were several touching moments, most notably the haunting ballad “Laying Down to Perish,” a true story about four Newfoundland hunters who carved a farewell message to their families before dying at sea in 1917. Doyle also paid tribute to the LGBTQ community with the ukulele-accompanied “Beautiful to Me,” written as a tribute to the LGBTQ community, in response to transphobic legislation in the States. “I just wanted everyone to know that my concerts are open doors,” he explained.

Doyle knows well the power of music to make people feel safe and accepted. Introducing the ballad “Somewhere in a Song” (a tribute to his parents), Doyle reflected on growing up in Newfoundland in the 60s and 70s; the family didn’t have a lot of “stuff,” but they had “a lot of music and a lot of love.”

After that one, Doyle noted that there weren’t many more “wholesome” songs on the set list, which was dominated by “murderous pirates and drunken sailors.”

Alan Doyle never disappoints, and Friday’s concert was a raucus party packed with great stories and rowdy drinking songs. What more can you want? 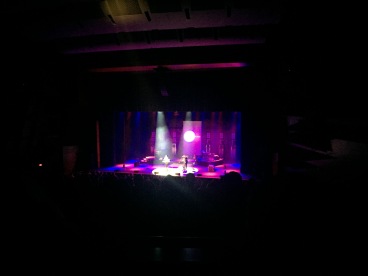 The show was opened by Newfoundland duo Fortunate Ones, who played a great set of contemporary folk tunes. Their most stunning song was the chilling closer “Lay me Down,” about a woman awaiting news from her lover who has died at sea.

O’Brien recounted writing the heartfelt love song “Before You” as a wedding present for his brother – only to be told that the couple had decided to go with an Ed Sheeran song for their first dance. (“Thanks for giving Ed his big break,” O’Brien responded).

The duo also confessed to having a fraught history with Calgary, the site of their “first Juno loss.” In their early days, they also lost “the best musician in the band” (the brother of keyboardist Catherine Allan) to the city when he moved out west. (No hard feelings, they assured the audience).

O’Brien spoke highly of his  experience touring with Doyle, whom he called “salt of the earth.”

“It’s an honour having Alan Doyle close for us every night,” he joked.

Performers: Alan Doyle and Fortunate Ones