Taking the stage in sparkling pants and a long gold cape, frontwoman Danielle McTaggart was a dynamic presence as the band tore through tracks from their latest record Phases and their 2015 debut Black to Gold.

After setting the stage with the atmospheric “Wicked Thing,” the band kicked things up with their latest single “Live Through the Night” and the nostalgic, forward-looking “Stolen Days.”

Buoyed by McTaggart’s powerful voice and exuberant stage presence, the slick songs took on an almost hypnotic quality, the frosty instrumentation contrasting nicely with the passion and vitality of the lyrics.

With its urgent “What are you waiting for?” chorus, Black to Gold standout “Tongues” was a highlight of the set, as was 2018’s “Flashes,” an alluring electronica track that had Danielle crooning “We don’t need a superficial love” over robotic beats and shimmery synths.

Also cool was a steely cover of Stevie Nicks’s “Edge of Seventeen,” which segued into “Little By Little.”

The band concluded the first part of their set with barn-burning single “Boys and Blondes,” before kicking off their encore with 2013 single “I Heard I Had.”

Looking out onto the jam-packed dance floor, Dear Rouge co-founder Drew McTaggart took the opportunity to reminisce about the band’s poorly-attended early tours, including an eight-guest gig at Ottawa’s Mavericks bar (coincidentally, the same day the band found out they’d been added to rotation on Live 88.5.)

Reading a note from an audience member who’d been going through a hard time, the band dedicated a poignant performance of “Chains” to any fans who may be struggling.

They then closed with my personal favourite, a new wave power play called “Modern Shakedown.”

It was a fitting conclusion to a show that seamlessly blended live wire energy with earnest passion and an undeniable sense of style.

The first opening act of the night, Hamilton four-piece Ellevator, set the tone with a slow-burning set of spacey alt-pop. And dance-rockers Modern Space played a lively set that successfully got the crowd on their feet. 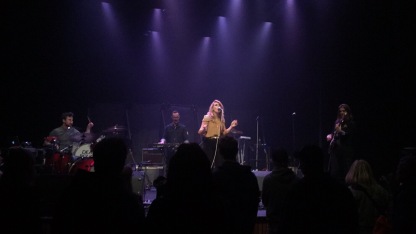 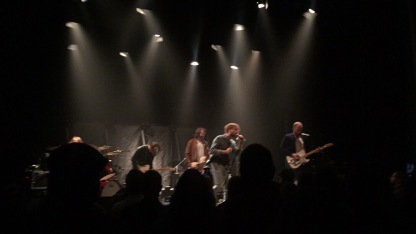