Read it below, or online at Enchanted Conversation. 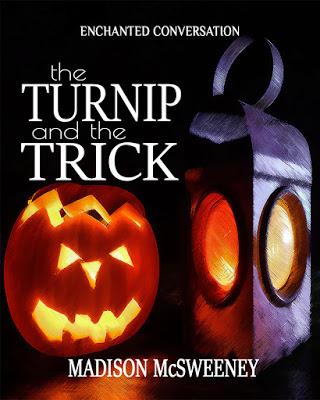 The Turnip and the Trick

Rose could feel the weather turn as she set the carved turnip on the stoop. The wind took on a crisp, wintry chill as it whisked orange and brown leaves across the fields, and the sky, blue just yesterday, seemed profoundly grey. The turnip wobbled before finding a precarious balance, its ghastly face grinning malevolently at the road. Rose shuddered and shut the door behind her, her hand landing unconsciously on her rounded belly.

On the other side of the door, a black plastic tub sat on a wooden stool, filled to the brim with generous heaps of wrapped candies, dried fruits, and full-sized chocolate bars: Hershey, Aero, Coffee Crisp, KitKat. She wondered, with no shortage of bitterness, if she shouldn’t have bought more of the latter.

The little monsters were partial to KitKats.

Nancy McCarthy had given birth just two months prior, and her daughter yawned agitatedly as she gently pulled her from the car seat. She’d been nervous about this visit; thankfully, Rose was pregnant again, which eased the tension somewhat.

As Rose greeted her at the door, Nancy dutifully admired the turnip, but laughed at the tub of candy. “Are those going to survive ‘til Halloween?” she asked.

Nancy wasn’t sure how to respond. “I wouldn’t think you’d get trick-or-treaters all the way out here. We never do.”

Rose’s tone didn’t lighten. “One year, we did.”

Nancy didn’t see how this was possible – Rose, like herself, lived on the outskirts of a farming community, where there was rarely any foot traffic, and certainly not at night – but she didn’t want to argue. “Better safe than sorry, I suppose.”

The visit progressed with similar awkwardness, with Rose giving terse answers to even the pleasantest of questions and the prominently-displayed photo of her first child adding a morbid air to the proceedings. Nancy chastised herself for thinking like that; but nonetheless, it was true.

It was only as she pulled into her own driveway that she realized the cause of her friend’s distress, and cursed herself for her ignorance. It had been around this time of year, two autumns ago, that Rose had lost her son.

I should sleep, Rose thought, as the sky grew dim and the sun sank below the cornfields on Halloween night. She looked to the candy tub and mulled just leaving it on the porch next to the jack-o-lantern – but if she did that, there was the chance that something else might abscond with it before her visitors arrived. No, that wouldn’t do, she decided, placing a protective hand on her swollen stomach.

“It’s okay,” she whispered to her unborn child, speaking to herself more than anyone. “They can’t still be vengeful, after all this time. They’ll take their treats and go.”

And so the sky grew darker and the night grew colder as Rose sat in the den with the window half open, waiting for the goblins to arrive.

She was alerted to their presence not by a knock on the door or the ringing of a doorbell, but by the thwack of an egg hitting the side of the house, cracking and smearing yellow and red goo across the window glass.

At first, Rose thought the red guck was an optical illusion, a trick of the fading light; but no. It was, in fact, the remains of a half-formed baby bird, expelled from its tiny womb and left to rot on her porch. Her teeth clenched, and she was consumed with hatred for them.

She could hear them outside now, laughing like demons and chattering like squirrels, and for a moment she found herself filled with the wild hope that if she just ignored them, they would go away. No treats for you, she imagined herself hissing; go suck the meat from the defenseless eggs you stole from their mothers’s nests. Starve to death, for all she cared. But then she remembered her own child inside of her, and her hate turned to fear. The goblins demanded a treat tonight, and they wouldn’t leave unsated.

Fearful that she’d missed her chance to make the offering, Rose jumped up and rushed to the foyer, throwing the door open in a mad panic. The porch was empty. For a second, she thought they’d grown tired of waiting, and her heart sank. They’d be back, she knew, and when they returned, candy wouldn’t suffice. She was about to call out when she saw the first of the creatures emerge from the tangle of dead bushes along her walkway.

It was a freakish-looking thing, no bigger than a pumpkin and covered with warts and pus-filled boils, ready to pop. It walked with the uncertain gait of a toddler, but its teeth were sharp and its eyes were cruel. Behind it, five others followed, identical in structure but each boasting their own distinct deformities.

In her haste, she’d knocked over the candy bowl, sending a few excess chocolate bars scattering across the floor. Her whole body trembling, she picked up the bowl and dangled it over the threshold, her arm extended to put as much distance as possible between herself and the creatures. The head goblin – the tallest of the group, although that was a dubious distinction – looked past the bowl and over her shoulder, but the leering visage of the turnip warned it not to violate the house.

Shifting its gaze to the candy bowl, the goblin snatched it from her hands and began to dig greedily through the chocolates, shoving the KitKats and full-sized Coffee Crisps into its soiled overalls. Two of the lesser beasts, enraged at their leader’s greed but secure in their own, pounced on him and began to pull his clothes apart to get at the pilfered chocolate. The three others waited on the sidelines to catch any stray sweets that flew out of the bowl, swallowing handfuls of hard candy, plastic and all.

Rose barely registered any of this, though, because her eyes had fallen on a seventh visitor. This one was smaller than the others, and lingered shyly a few paces behind them, staring at her from the brush. The sight of it made her want to weep.

The creature wasn’t remotely human anymore, if it had ever been – in fact, it was perhaps even uglier than the others, the delicacy of its features throwing its grotesqueries into even sharper relief. Its face was also scarred and marred by angry protuberances, but its eyes were a lovely robin’s egg blue, bright and wide and strangely guileless. She would have recognized them anywhere.

Do you remember me? Rose wanted to ask, but the words curdled on her tongue. Instead, she knelt and groped for one of the fallen candy bars. Never abandoning eye contact with the little goblin, she wrapped her hand around a bar – Hershey, cookies and cream, her husband’s favourite – and silently offered it up.

The young goblin approached tentatively at first, before darting up the porch in a sudden burst of speed and snatching the bar from her hand. It paused to regard her suspiciously before tearing the wrapping and taking a bite; but it barely had a chance to sink its teeth into the chocolate before one of the larger goblins knocked it out of his hand.

Those incongruously beautiful blue eyes welled up with tears, but the other goblin subdued them with a snarl. The monsters had finished their bickering and were ready to move on.

As the goblins hobbled down the walkway, the blue-eyed one once again hesitated.

He knows me, Rose thought. He still knows me.

Looking nervously over its shoulder, the pitiful creature slunk back towards the open door, its hand extended, the tiny fist clutched around something small but precious. He wanted to give something to her, Rose realized, and reached to receive it.

The child-goblin was now in front of her, its hand close enough to hold hers. She waited patiently, palm open, although she wanted nothing more than to pull him into the house and lock the door behind them. The little hand opened, and the bloody remains of an aborted fetal bird fell into hers.

Rose gagged, stifling a scream. The creature looked into her eyes one final time, giggled, and ran off to join its companions.

Later in the evening, Nancy received her first trick-or-treaters in years.

She was surprised to see them – and even more surprised to find them unaccompanied by adults of any kind. Then again, perhaps their parents were parked somewhere behind the trees at the edge of the driveway. Even so, she thought, it couldn’t be wise to let children so young wander across a vast and darkened farmhouse yard by themselves. At least they looked young – it was hard to tell under the masks.

Regardless, she had no candy for them, and told them so regretfully. Perhaps Rose had been wise to stock up. She’d make sure to buy some next year.

The kids left without making too much of a fuss (then again, had they said anything at all? Other than trick or treat?), and Nancy returned to her sofa where a grainy television and lukewarm bowl of popcorn awaited. Harvey was working late at the police station – there was always lots of trouble on Halloween night – and the baby was asleep, so for all intents and purposes, she had the house to herself.

She tried to keep her eyes open until the end of the late movie, but started fading fast. She flicked the TV off and dumped the remnants of the popcorn into the kitchen garbage before heading straight up the stairs and towards her bedroom, pausing only to peek into the baby’s room, where she found the crib empty.