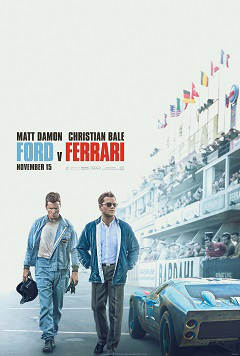 The thing about Ford v Ferrari is that Ferrari isn’t really the villain.

James Mangold’s film chronicles the Ford Motor Company’s efforts to bolster their public image by beating Ferrari at the gruelling twenty-four hour Le Mans race. But by the time unpredictable driver Ken Miles faces off against the Italian carmaker, we’re just satisfied that he’s prevailed over his naysayers at Ford.

Tracy Letts’s blustering Henry Ford II is not the most sympathetic of characters (you almost find yourself siding with Enzo Ferrari, an artisan who mocks Ford’s “ugly little cars” built in “ugly little factories”), but you can’t help but root for the team he assembles. The man tasked with designing Ford’s winning race car is Carroll Shelby (Matt Damon), a former driver who won Le Mans in 1959 before being forced to retire due to a heart condition. With Shelby comes the unpredictable driver Ken Miles (Christian Bale), who lacks tact but knows cars intimately.

Although Miles is Ford’s best chance at victory, Shelby has battle meddling executives who want to replace him with a more PR-friendly driver. The question that hangs over most of the film isn’t whether Miles is going to win Le Mans, but whether he’s even going to be allowed to compete.

These behind-the-scenes machinations are infuriating, made even more-so by the story’s tragic ending.

Miles’s premature death in a 1966 crash is foreshadowed by an early scene of his car catching fire, witnessed by his young son Peter. The incident is brushed off by the race team, but shakes Peter to his core; from that point on, you can see the subdued terror on his face as he follow’s Ken’s races. He’s not afraid of his father losing, but dying.

The racing scenes are a beautiful and slightly terrifying sensory assault. In one scene, Shelley takes Ford for a reckless parking lot spin in the car that leaves the CEO terrifying weeping uncontrollably. But Shelby and Miles never look more at ease than when they’re behind the wheel. The Le Mans sequence is especially thrilling, with maddening technical difficulties and corporate interference adding suspense as Miles pushes his car to its limits.

Christian Bale and Matt Damon expertly embody two very different men bonded by their shared passion. Bale is appropriately manic as the sensitive, excitable Miles, and Damon delivers an unshowy performance as Shelby, equally headstrong but more adept at navigating the politics of driving. Shelby displays an understated savviness in his dealings with Henry Ford II, telling the CEO what he wants to hear until the moment is right to tell him what he needs to hear. “You can’t win a race by committee,” he argues, appealing for more autonomy over the racing team.