If you’re looking for some reading (and listening) material for this long weekend, you’ve come to the right place.

Read on for some of my latest publications (including a bunch of stories and poems you can read right now for free) as well as recommendations of short fiction, essays, and poems that you can read online. Not to mention, a few songs I’ve been addicted to and a trippy video that’s a horror movie in the making…

On June 16th, I completed the first draft of my first-ever novella, a horror comedy called The Doom That Came To Mellonville.

I took this photo off my balcony immediately after typing “The End.”

A quirky horror-comedy in the tradition of Beetlejuice, The ‘Burbs, and The Frighteners, Doom tells the story of a mild-mannered accountant who accidentally curses his small town after putting his late son’s estate up for action.

This story is one I’ve abandoned and resurrected many times over several years, its word count ballooning to around 20,000. Though the process was agonizing at times, I had a fun time writing it (particularly the scene where Lawrence Plank and his dead son argue about folk music). I’m very happy with the final product and I can’t wait to share it with people!

Miskatonic Review on “The Song Inside the Star”

Grateful to of the Miskatonic Review for this great write-up of my Lovecraftian short story “The Song Inside the Star,” about a teen pop star who summons the Goat with 1000 Young.

“By writing in a way that contemporary readers are used to digesting information, she helps sink you into the world of her story that bends this new reality around yours.  It may have you questioning yourself the next time you buy a ticket to a concert by the next-big-thing. When it’s safe to go to concerts again, maybe, just maybe, it won’t be.”

You can read the full review here, or check out the full story online here.

I started writing this one in the “Notes” section of my phone during the opening act of an Arkells concert.

This band used to do a lot of free outdoor shows in Ottawa, including several campus events when I was in university; this was my first time seeing them headline an arena, and it almost felt like the end of an era. Still an amazing show, but there was definitely some cognitive dissonance at play.

The opening act that evening was American folk-rock band Lord Huron, whose slightly eerie set (combined with the weird head-space I was already in) inspired this story of rock-n-roll and ritual sacrifice.

I was very excited to present this tale as part of #FrightGirlSummer. You can read it here.

A little poem about apartment living:

“Leave me alone, I don’t have pests

is something someone with bugs would insist

Come in, I guess…

Many thanks to editor Kristin Garth for finding a home for this in the Pink Plastic House! She also took this cute photo to illustrate it.

You can read the full poem below at the Pink Plastic House Instagram:

A macabre poem for this witchcraft-themed issue:

“…she haggles at the stalls;
trades bronze coins for leg of lamb
takes stained glass for widow’s root
wanders off mumbling ‘fore the fishmonger
calls her back; “just for you, two-for-one.”
two dead-eyed trout.

she takes what is holy…”

With startling re-interpretations of witch figures of myth, including a feminist retelling of the King Arthur legend and a post-apocalyptic take on Baba Yaga, the whole issue is a very good read.

Check it out at Cauldron Anthology. 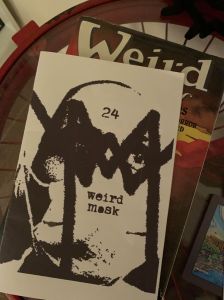 Two globetrotting academics, one British, one American, get stranded in a storm. As the rains fall and the sky darkens, they find refuge in a mountain shack, realizing too late that they’ve sought shelter…

“In the Death House”

“There were two occupants in the house that we could see: an old woman, her hair a shocking red, and a little girl, sucking contentedly on the black hair of a homemade doll. Over the groan and crackle of the fire, I thought I could hear the desolate lamentations of a great many men on an upper floor. I immediately understood: this was a house where the dying were tended to.”

You can order it here. 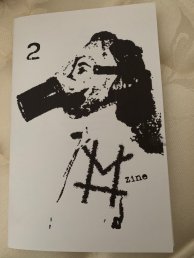 Happy to have four of my favourite poems appear in Issue 2 of M Zine. Science fiction-inspired but intimate; regret-laden odes to aliens and body horror and all that fun stuff.

You can order the zine here.

Recently received a couple of acceptances I’m very excited about. 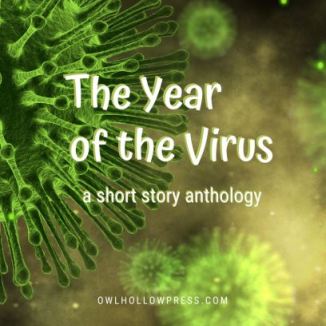 My social distancing telepathy rom-com “Living Vicariously Through You” will appear in Owl Hollow Press’s upcoming anthology tentatively titled The Year of the Virus.

I’ve worked with this editorial team twice before, and I have no doubt they’ll select stories that address this strange era with sensitivity and insight.

“Living Vicariously” is also my first rom-com, which I’m pretty excited about. (That said, it’s also a science fiction story, and I couldn’t resist adding in some unnerving sequences).

Additionally, while I can’t provide details yet, I also received some good news about a story I’ve long been trying to find a home for. It’s a nasty little revenge story that draws from children’s literature and splatter horror.

“We Are Chaos” by Marilyn Manson

To be perfectly honest, I’m still trying to wrap my head around this new Manson single. It definitely doesn’t sound like anything he’s done before; at the same time, it evokes the poppier moments of records like Mechanical Animals.

In any case, I’m looking forward to hearing this in the context of an album. If you ask me, “We Are Chaos” has a cinematic feel that would work as the denouement of a concept album – here’s hoping!

“Identical Love” by July Talk [Pray for It]

I’ve been really enjoying this new July Talk album – it’s a slow-burn, but very hypnotic. Feels almost like floating in the ocean.

“Quitting You” by Arkells

An acoustic love song by Arkells! Exactly what we need in these trying times!

(And yes, this is the band that kind-of sort-of inspired “Folk Horror.” One of my favourite groups.)

“My Obsession” by William Gibson [Wired]

William Gibson can make the act of scrolling through a website feel like a disorienting journey through time and space. So it’s no surprise I had a great time reading his non-fiction collection Distrust That Particular Flavour, which sees the cyberpunk author reflecting on film-making, internet culture, history, science fiction and Steely Dan.

Chronicling his brief foray into eBay addition and vintage watch collecting, Gibson’s 1999 essay “My Obsession” is both funny and insightful. He perceives the online auction site as a sort of discombobulated rummage sale, allowing you to browse the contents of “the world’s attic” in search of anachronistic treasures:

“Most of our toys, unlike the wood and pot-metal of yore, were extrusion-molded ephemera, fragile styrene simulacra, highly unlikely to survive the random insults of time. A great deal of the boomer’s remembered world has been melted down, or crushed into unreadable fragments in forgotten strata of landfill. What remains, particularly if it’s “mint in box,” becomes increasingly rarefied.”

Read it at Wired.

Having suffered through a sweltering July, I could relate to the protagonist’s frustrations in this summery horror story by Tabatha Wood:

​“You’ve not been here long then?”

“Living on your own?” he pressed.

I wasn’t about to answer that.

“I see a lot of girls like you, in my job. Not many of them as pretty as you though, eh? I always tell them the same thing. Living alone, it’s not a great idea…”

Read it over at Fright Girl Summer.

I’ve been a huge Hole fan since high school, and Courtney Love’s lyricism was a big influence on my own writing. So I really enjoyed this mystical yet frank poem by vanessa maki, which draws from their signature song “Violet.”

Read it at Rising Phoenix Review.

“Ready or Not” by Cassie Daley [#FrightGirlSummer]

This short story by Cassie Daley is both a fresh take on a classic tale and a masterful bit of sleight-of-hand. Daley weaves a disturbing tale of abuse and exploitation, leading to a grim twist that’s almost comforting by comparison:

“‘Who are you?’ In the passenger seat, I glance out of the windshield and don’t recognize anything. I don’t feel as worried as I think I should. We drive silently through residential streets with names I’ve never heard of, lined with houses that are just a little bit… off. At first I can’t pinpoint why the houses look strange, but the longer I stare the more obvious it becomes.”

Read it over at Fright Girl Summer.

“Run Away With Me” by Kendall A. Bell [Pink Plastic House]

Another music-based poem! Inspired by the works of Carly Rae Jepsen, this summery poem by Kendall A. Bell captures the carefree (yet consequential) vibe of a great pop song.

Read it at the Pink Plastic House Instagram below:

I love a good Bigfoot story (and I’ve written a few bad ones, myself!), so I had a lot of fun reading this Sasquatch-hunting meet-cute by Jennifer Lee Rossman:

“But something lived in these woods. Possibly in woods all across the continent. That many people couldn’t mistake a bear for an ape, they couldn’t all be hoaxes. Certainly the creature she had seen as a teen hadn’t been a bear or a man in a suit, though she kept that sighting quiet for fear of ridicule.”

Read it over at her blog.

It has been hot here in Ottawa, interspersed with intermittent bursts of rain. In other words, plenty of opportunities to stay in and get some writing done in front of an oscillating fan.

In addition to the long-gestating novel, I’m currently working on a surreal horror-fantasy with mild Phantasm vibes, and a seaside cosmic horror story that I’m fairly sure was inspired by this wonderful clip:

So, how is this bizarre summer treating everyone?