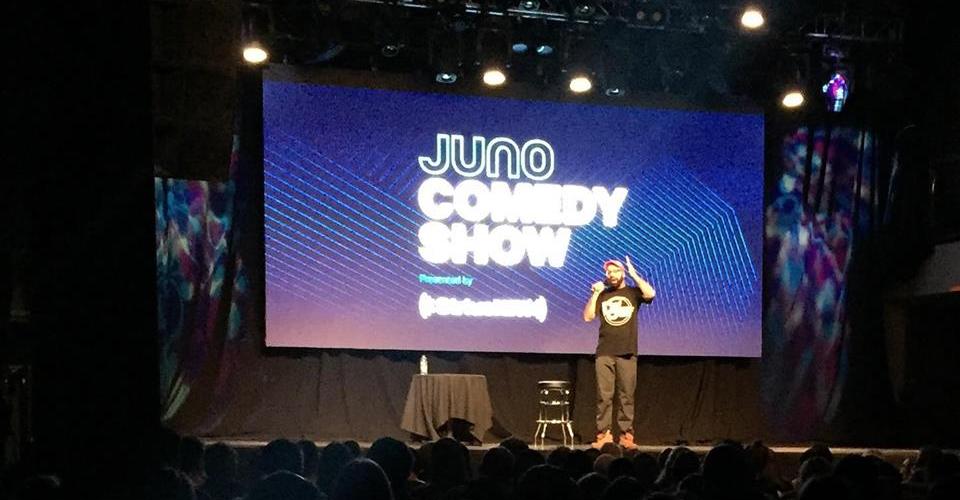 The venue was a welcome change from the basement clubs where show-opener Chanty Marostica is used to performing at – for one thing, they noted, it has multiple exits.

Marostica confessed that comedy clubs can be a little sketchy if you’re a female or otherwise marginalized performer, what with the dim lighting, intimidating crowds, and spotty cell service. “It’s usually a brick backdrop,” they added; “because nothing makes women feel safe like a back alley.”

Their eclectic, energetic set touched on growing up in Winnipeg, coming out as trans and acclimatizing people to using they/them pronouns, being mistaken for a diverse array of celebrities who look nothing like them, and “winning” small-town Tinder. They closed with a whimsically anthropological analysis of the behaviour of women at nightclubs (“They’re all named Tiffany,” Marostica noted, and they spend much of the night drunkenly searching for one or more lost friends, also named Tiffany.) 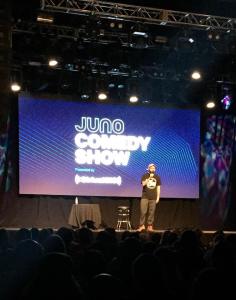 For me, his was the funniest set of the night – I was laughing obnoxiously pretty much the whole way through, starting with a relatable bit about the trials and tribulations of buying shawarma.

He concluded with a hysterical anecdote about his father’s seething resentment of Santa Claus – a traumatic tale that ended with his father, dressed as the “bigshot” himself on Christmas morning, breaking character to rant about how he works hard to support his family only to have St. Nick steal his thunder. “F*ck Santa and all the elves!” he cried, tearing off his beard. “I am Santa Claus!”

(Someone get this family a sitcom!)

Next up was Mayce Galoni, who kicked off his set with the revelation that his parents had originally wanted to name him “Blade.”

“I think they were expecting a difference kind of son,” mused the bespectacled comic.

Galoni’s mild-mannered demeanor was contrasted by a surprisingly biting set that touched on religion, feminism, and other hot-button topics. At one point, Maloney accidentally earned the audience’s ire with an ad-libbed shot at the city of London. “This is the most confrontational I have ever been,” he demurred.

Closing comic Pat Thornton took the crowd on an odyssey through his inbox, ranting about the never-ceasing onslaught of spam emails he receives. These ran the gamut from frantic sale announcements by Old Navy (who write every two weeks announcing that it is the “last chance” for 50% off women’s jeans), to KFC customer satisfaction surveys (“You know how you did, KFC”), to inane updates from airports in foreign countries (PSA: the Burger King in the Manchester airport is currently being renovated).

Other funny bits included a domestic dispute over watermelon-flavoured sparkling water (“Keep in mind that all of this drama is over a hint of watermelon”) and pitches for alternate Toyota Corolla commercials.

The JUNO Awards will air on Sunday, March 17th on CBC. In addition to Sunday’s broadcast, more awards will be handed out at the March 16th Gala Dinner and Awards, which can be live-streamed here.