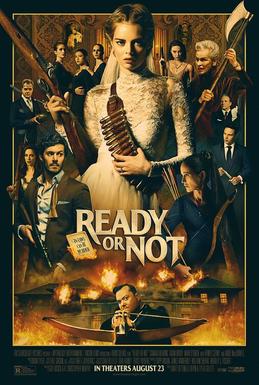 Ready Or Not is a horror comedy about a new bride who, in order to officially join the family, must play a potentially deadly game.

Although the game in question is hide and seek, the movie’s elegant yet campy tone is more reminiscent of Clue (or, if we’re sticking with board game comparisons, booby-trap riddled 1313 Dead End Drive).

The Le Domas family are wealthy gaming magnates who made their fortune with the help of a mysterious benefactor: Mr. Le Bail, a generally silent partner who demands a human sacrifice every generation or so. The victim is invariably someone marrying into the family; the ritual takes the form of a gruelling game of hide and seek, in which the seekers have crossbows and firearms and the hider is shot on sight.

Grace, the newest Mrs. Le Domas, is a former foster child who doesn’t understand her husband’s strained relations until her own wedding night becomes a bloodbath.

Set on the shadowy grounds of the stately Le Domas mansion, Ready Or Not plays like a high-octane twist on what Twitter curator @PulpLibrarian calls the “women with great hair fleeing gothic houses” genre. It’s a charmingly old-school premise, executed with some modern touches. In one scene, our heroine flees in one of the family’s cars, only to have it reported stolen and remotely deactivated by a fictional equivalent of CAA. Later, the family watches helplessly as their servant unknowingly live-streams his demise.

Grace is a tough and engaging heroine, swearing profusely as she flees shotgun-wielding in-laws in sneakers and an increasingly tattered wedding dress. The film’s villains are also delightfully quirky: in addition to Henry Czerny’s flustered patriarch and Andie McDowell as a protective mother-in-law, we have a coke-addled sister in law who keeps accidentally shooting the help; a witchlike widowed aunt; and a sinister manservant whose taste for classical music may be the death of him.

The wildcards in the situation are Grace’s husband Alex, whose love for her may or may not overcome his fear of the family curse, and his brooding alcoholic brother (Adam Brody), equally disillusioned by his cursed family and social climbing wife.

It’s a fun plot full of scares and surprises, accompanied by breakneck suspense and a healthy heaping of gore. It’s also bound to make the most dysfunctional families seem peaceful by comparison.

Title: Ready Or Not