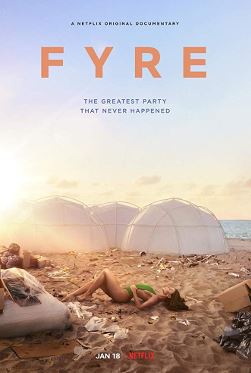 Fyre: The Greatest Party That Never Happened is an anatomy of a failed event that doubles as a scathing cultural critique.

Billed as a luxury concert experience held at an exclusive tropical island, the Fyre Festival was heavily promoted on social media, with stylish endorsements from “influencers” creating buzz well before anyone really knew what it was.

As anyone who followed the news that year knows, the festival was an unmitigated disaster. Fans expecting luxury accommodations and gourmet food were instead greeted with sparse tents and the world’s saddest-looking cheese sandwiches. In the end, most of the performances were cancelled and guests were left stranded on the island. (Appropriately, one disgruntled attendee disembarked from the plane and immediately Tweeted at his lawyer).

Chris Smith’s documentary, released on Netflix early this year, goes on a deep dive to find out where it went so wrong. Interviewing everyone from event organizers to local business owners expected to handle an influx of angry tourists, Fyre reveals that the chaos on the ground was just the tip of the iceberg – behind the scenes, things were even crazier.

Almost every aspect of the Fyre Festival seems to have been mishandled from the beginning, in ways that could have been (at first) chalked up to garden variety incompetence. According to crew members, an early commercial shoot felt less like an advertising strategy and more like an excuse for an opulent beach party. An inexperienced Fyre employee tasked with booking talent admits that he was in over his head, which led him to “grossly” overpay acts. Registrants were encouraged to load spending money onto their wristbands, despite spotty internet access on the island. As the festival took shape, the negligence of the organizers becomes more apparent. Fyre CEO and festival co-founder Billy McFarland allegedly ignored multiple warnings about capacity problems and insufficient resources, responding glibly to his team’s dire predictions. Finally, it’s revealed that McFarland defrauded investors out of millions of dollars.

A lot of coverage of the Fyre Festival has leaned on schadenfreude, viciously mocking the mostly millennial concertgoers who paid thousands of dollars to end up stranded in the Bahamas. Fyre admirably finds some empathy in the story, giving ample screen-time to stiffed vendors (including a local restaurant owner whose emotional account inspired a GoFundMe campaign) and the employees of the apparently legitimate side of Fyre, who were unceremoniously let go after the festival hit the fan.

Conversely, it seems to me that the movie was too harsh on the influencers paid to promote the event. The supermodels featured in those early Fyre ads had no way of knowing what a gong show it would become, any more than a Victoria’s Secret model could be expected to know about supply chain issues at the factory. This blame-shifting may make the sordid story seem sexier, but it’s not exactly fair. There’s a clear villain in this movie, and it’s the guy who ended up jailed for fraud.

Fyre’s final moments frame the story as a cautionary tale of our image-obsessed society, where people defy their better judgement for a good Instagram photo. The filmmakers have a point here, although I’m glad they don’t belabor it too much – the world doesn’t need any more millennial-bashing, and poor consumer decision-making is no excuse for false advertising.

As much as the Fyre Festival debacle is a uniquely modern story, the impulses behind it are nothing new. Fyre definitely has something to say about our strange social media world, but the film works best as an old-fashioned chronicle of greed and hubris.