The plot begins when a young man named Kim Ki-woo gets a job tutoring for the wealthy Park family. He doesn’t actually have the credentials they’re looking for, but armed with a phoney reference from a friend (who has a gross thing for the Parks’s teenage daughter) and a forged diploma, he gets hired without much fuss.

When his student’s mother expresses her conviction that her younger son is “an eccentric genius,” Ki-woo scams his little sister a job as the boy’s art teacher. (She wheedles herself a promotion when she tells Mrs. Park she’s actually an art therapist, and that the boy’s paintings suggest an underlying mental disorder). The siblings use increasingly underhanded tactics to replace the Park family’s long-time staff with their own parents. 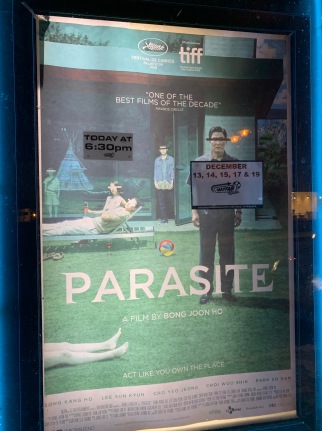 The Kims don’t have many qualms about defrauding the Parks, who, Mrs. Kim observes, are “nice because they’re rich.” The kind of people who are superficially warm, but (when they think they’re alone) will casually debate whether their new driver smells more like a radish or an old rag. The staff, meanwhile, are collateral damage.

Their plan works with clock-like precision until suddenly, everything goes horribly wrong. The climax of the film is bleakly madcap chaos, which is in turn cut off by – well, I won’t spoil it.

Suffice to say, Parasite is an intricately plotted, subtly devastating black comedy where humour and horror go hand in hand.